Not long ago I came across some information that I believe will change the home media/theater market forever. By now I'm sure almost everyone has heard of HDMI, and how its making setting up home media/theater centers a breeze. Well let me be the first to introduce you to HDBaseT. I'm sure only a few people have heard of this new technology, but in a few years, I'm betting everyone will be using it.
So why am I going out on a limb and staking my reputation on a product no one has seen yet. Well this story starts a few weeks ago while out for drinks with an old friend. He's married with children so I don't see him very often anymore and it's great being able to catchup. At one point during the evening he brought up this conversation I had with him back in 2001. He says to me, "remember when you predicted that bluetooth was going to be everywhere?" This got me to thinking...  I remembered that in 2001 the Ferrari F1 team was implementing a new technology called "bluetooth" into their racing cars. This technology could send and receive secure telemetry from on-board sensors to the pit garage. Mechanics could see what was happening in and around the racing car each time the car sped past the pit lane, securely so that opposing teams couldn't intercept that data. At the time (2001) sending and receiving data over the air was being done by infrared or radio frequency, none of which was very secure.
I don't know how many of you remember trying to sync a cellular phone over infrared, but it was an exercise in futility. You had to position the phone inline with the IR device, just getting a connection was difficult enough and you couldn't move it or the connection would sever. Looking around my office I see I still have my Mobile-Action MA-620 IR device, lol.
My friend goes on the mention that bluetooth is everywhere, in GPS devices, car stereos, headphones, mobile phones, laptops. Sadly I think to myself but Bluetooth never became as great as I had envisioned it becoming. I was hoping to see 7.1 surround sound Bluetooth speakers, mobile phones being used as TV channel changers, or computer input devices. As is the case with much of the great technology we have, royalties and licensing sometimes increases the cost so much that the product fails. With bluetooth the cost of producing the device is almost nothing its the licensing that remains expensive and many manufactures are looking at other ways of producing the same results at cheaper prices. So my friend then asks what do you think is coming next, and I didn't have an answer, but I do now and its HDBaseT. 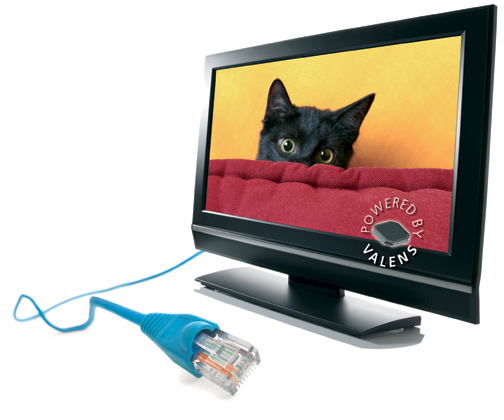 Ok so what is HDBaseT and what does it do exactly. Explaining this is going to be a bit complex, but I'll try to make it as easy to understand as possible. HDBaseT is like introducing the Mp3 player all over again, but incorporating all media (audio and video) devices. The Mp3 player (Digital Audio Device) revolutionized the music industry by making music digital, and once music was made digital it could be manipulated in so many ways. You could copy, transfer, send , receive, and erase your digital music without any loss of sound quality. So what if you could do the same with you home media/theater equipement? Imagine changing all your audio and video signals into digital, then copying, transferring, sending, and receiving your digital signal to anywhere in your home over one network cable or Wi-fi signal. This is the same thing that takes place when you surf the internet, digital images, audio, and video are sent from one computer to another almost instantly. 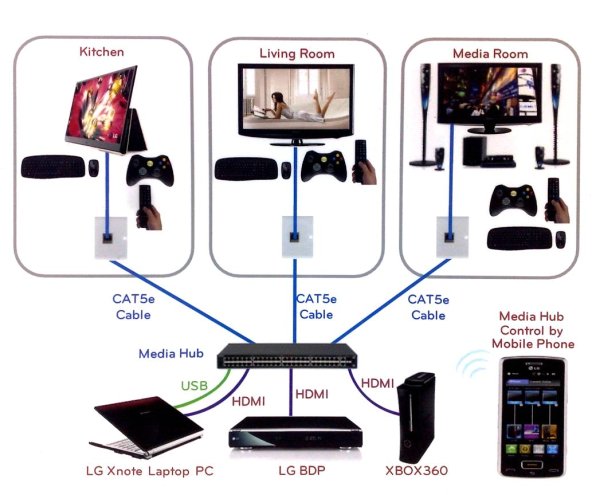 If this technology manages to become a reality, all your home media/theater equipment will be able to communicate with each other just like the computers at the office, or like you and your friends talk over Instant Messaging. Instead of having to run speaker wires all over your house, or hdmi cables, RCA cables, component cables, every device could communicate over a standardized Ethernet jack. Many of todays products, like gaming consoles, computers, and set-top cable boxes, that are already in our homes, come equipped with standardized Ethernet jacks. The costs associated with the implementing of an Ethernet jack into equipment is minimal, and hopefully in the future the tried and true Ethernet jack will be used for more then just getting internet access. 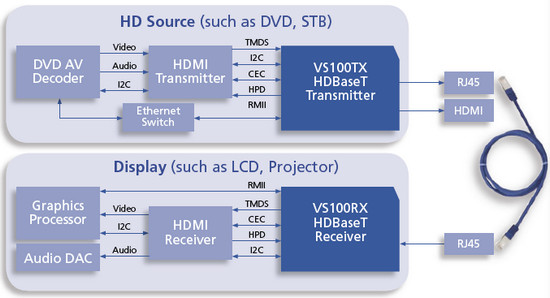