About a week and a half ago I went Christmas shopping with a friend of mine to grab a few last minute items. We ended up on West Broadway, for those that aren't familiar with this area, Broadway is an East/West thorough fare in the city of Vancouver, and much of it's streets are lined with retail outlets, cafes, and restaurants. West Broadway in particular has an old mom and pop feel to it's retail outlets, specializing in unique harder to find items. After some successful purchases we decided to stop for lunch, as we looked around you could see all kinds of restaurants, yet we managed to happen upon this tiny little place called Cafe D'Lite. From the exterior this establishment wasn't doing itself any favors, and we almost walked by just on its appearance alone. 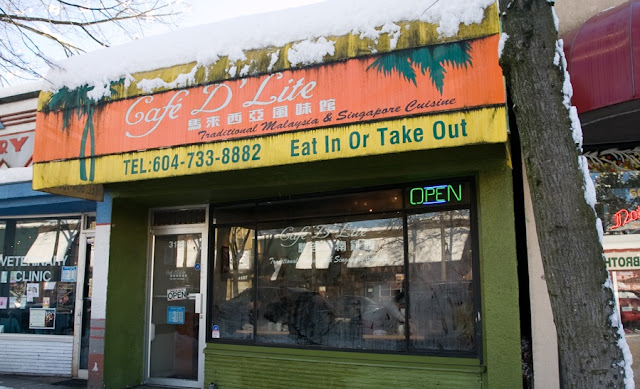 Inside however it looked much more appealing, warm and inviting. It was however quite small, hosting a seating capacity of approximately 20 or so people. It specialized in Malaysian and Singapore cuisine, which I had never tried before, and after seeing the menu I was starting to have my doubts about our selection. I took the plunge and ordered a Curry Chicken Vegetable Rice dish for $9.50. Well when they brought the plate I was surprised to see how huge the portion was,  it could have probably fed 2 people. More surprising than the portion size was the taste, it was absolutely fantastic. The plate was deep almost bowl like, which allowed for the curry chicken and vegetables to sit in a broth of its own juices. The curry was somewhat mild, yet tasty and the vegetables still maintained a slightly crisp texture. Using the rice to soak up all the juices almost made it seem like eating two different meals. Overall after my initial skepticism, of trying a new food cuisine and the less than appealing store front, I must say my first Malaysian cuisine experience turned out to be a memorably enjoyable meal that I long to repeat soon. So if you're in the 604 area code and happened to be in the Kitsilano area check out Cafe D'Lite at 3144 West Broadway, Vancouver BC.
My only regret is not having taken any photo's of the interior decor or the actually dish I was served. I would have loved to have pictures of those to show here on my blog. Hopefully I'll remember next time, and maybe I'll get adventurous and try something different.