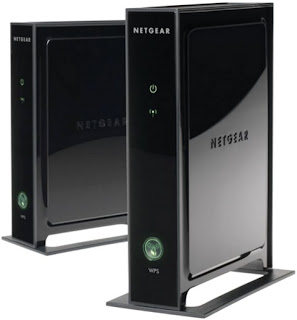 CES or the Consumer Electronics Show, kicks off this week, so there are going to be all kinds of cool and interesting gadgets coming out in the following days. Unfortunately I'm not there, but thats not going to stop me from having my say about whats hot and not. The first item that caught my attention, is the announcement of Netgear's wireless home theater kit the WNHDB3004. It's already won the CES 2011 Innovations Award, so what is it and whats so great about it?
The concept behind Netgear's wireless home theater kit is that it is able to broadcast a 3 Dimensional, High Definition video signal anywhere in you're house using a conventional wireless network (802.11n). Thats the same wireless network used by most WiFi devices today, like you're laptop, mobile phone, gaming console, or tablet. So what does this mean, well you no longer have to worry about where to place your new 60" 3D LED TV, because all you need to worry about is mounting it and having power. But wait there's more, now that same signal can be sent to multiple locations throughout your home, so you can finally mount a TV in all those place you've always wanted (like the bedroom ceiling or the loo). 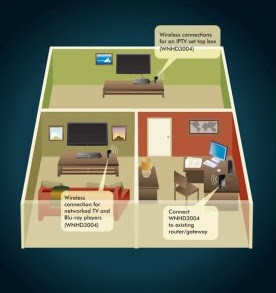 Ok this product is awesome, and is really going to give HDbaseT a run for its money (see my HDbaseT article here). Now the problem I see, is not in this product, but more the whole industry and here is why.
What we need in the Home Theater market is an evolution, away from old school audiophile beliefs, an into modern real-world digital existence. Let's face it, we're going digital no matter what, so true audiophiles can stick their heads in the sand, kick and scream, and throw as many tantrums as they want, thats not going to change what everyday people like me want.
What The People Want
Hopefully, this article will get picked up by people in the home theater industry, but for the time being, this is what people like me want
I don't think any of the suggestions I've made are unreasonable, or un-doable. Some one just has to take the steps in bringing this to the public, because this is what we want and need. So for all of you involved in the home theater market, feel free to use my suggestions. Any payments in the form of free merchandise would be gladly accepted.
Via - GizMag