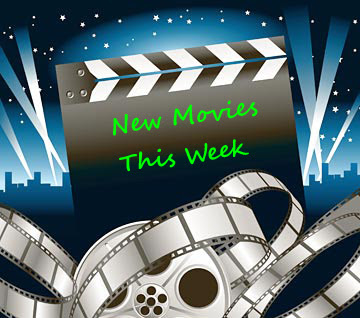 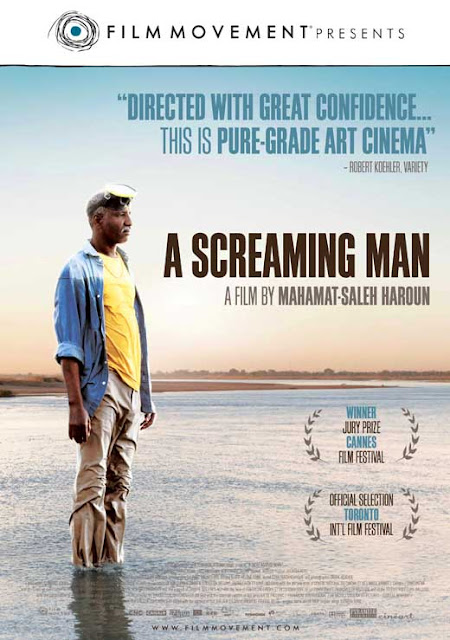 A Screaming Man
Release Date: April 13, 2011 (NY)
Studio: Film Movement
Director: Mahamat-Saleh Haroun
Screenwriter: Mahamat-Saleh Haroun
Starring: Youssouf Djaoro, Dioucounda Koma, Emile Abossolo M'bo
Genre: Drama
MPAA Rating: Not Available
Plot Summary: Shot in Chad, portraying the psychological fall-out of an endless civil war, "A Screaming Man" is titled ironically, from a director who credits Ozu as his strongest influence. Adam is a former swimming medalist, now a middle-aged hotel employee and head "pool man," who maintains this calm oasis as much for his own benefit as for the hotel's Western guests. The tensions between the father and his adult son are exacerbated when Adam loses his job to the younger man and the fragile world they both inhabit begins to crumble. With subtlety and grace, Haroun's modern fable eschews histrionics for a smart, restrained, yet deeply feeling drama in which personality, politics and place define its characters' reality. Winner, Jury Prize, 2010 Cannes Film Festival. 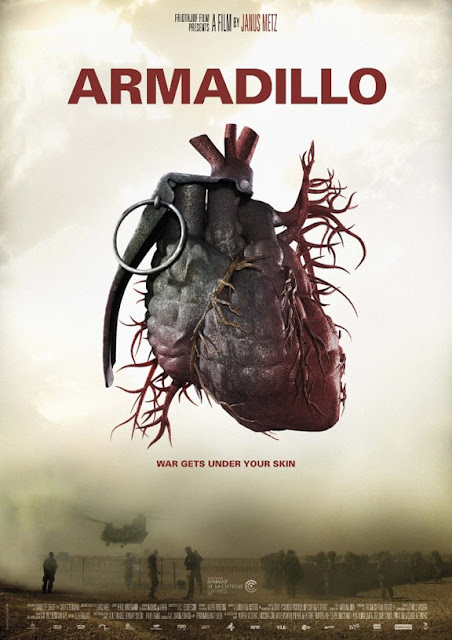 Armadillo
Release Date: April 15, 2011 (NY)
Studio: Lorber Films
Director: Janus Metz
Screenwriter: Not Available
Starring: Not Available
Genre: Documentary
MPAA Rating: Not Available
Plot Summary: The first documentary ever chosen to compete in the International Critics' Week at Cannes (where it won the grand prize), Janus Metz's "Armadillo" follows a platoon of Danish soldiers on a six-month tour of Afghanistan in 2009. An intimate, visually stunning account of both the horror and growing cynicism of modern warfare, the film premiered at the top of the box office in Denmark, provoking a national debate over government policy and the rules of engagement. 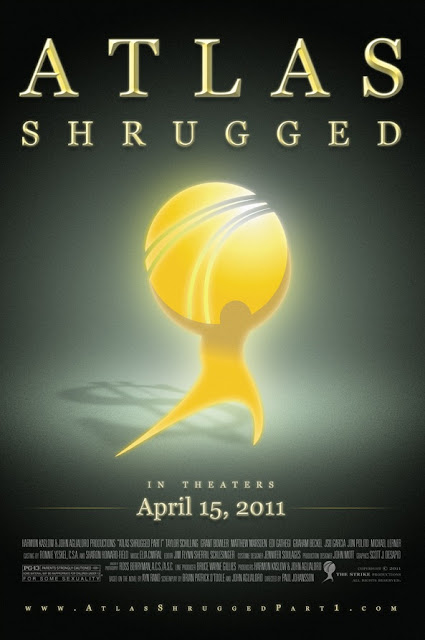 Atlas Shrugged
Release Date: April 15, 2011
Studio: Rocky Mountain Pictures
Director: Paul Johansson
Screenwriter: Patrick O'Toole
Starring: Taylor Schilling, Grant Bowler, Matthew Marsden, Graham Beckel, Edi Gathegi, Jsu Garcia, Michael Lerner
Genre: Drama, Mystery
MPAA Rating: PG-13 (for some sexuality)
Plot Summary: Dagny Taggart (Taylor Schilling) runs Taggart Transcontinental, the largest remaining railroad company in America, with intelligence, courage and integrity, despite the systematic disappearance of her best and most competent workers. She is drawn to industrialist Henry Rearden (Grant Bowler), one of the few men whose genius and commitment to his own ideas match her own. Rearden's super-strength metal alloy, Rearden Metal, holds the promise that innovation can overcome the slide into anarchy. Using the untested Rearden Metal, they rebuild the critical Taggart rail line in Colorado and pave the way for oil titan Ellis Wyatt (Graham Beckel) to feed the flame of a new American Renaissance. Hope rises again, when Dagny and Rearden discover the design of a revolutionary motor based on static electricity - in an abandoned engine factory - more proof to the sinister theory that the "men of the mind" (thinkers, industrialists, scientists, artists, and other innovators) are "on strike" and vanishing from society. Based on the Ayn Rand 1957 novel. 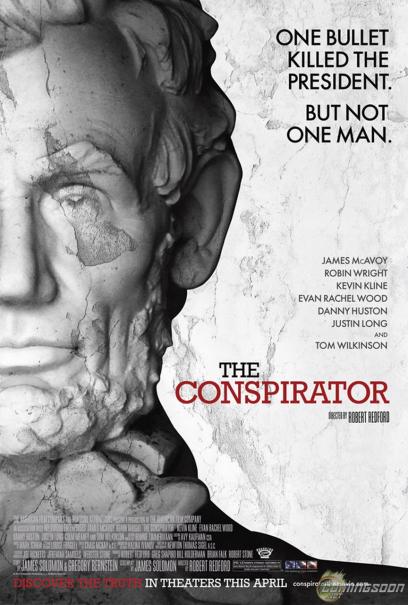 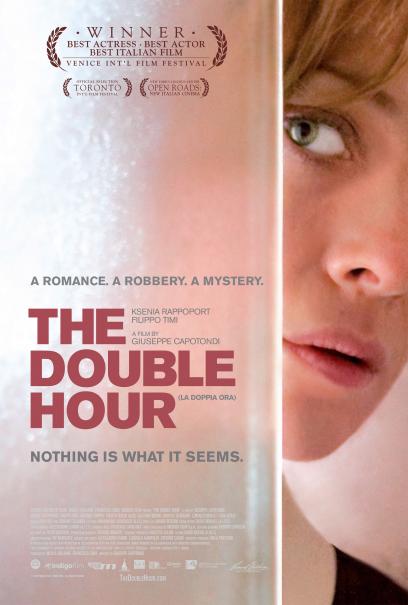 The Double Hour
Release Date: April 15, 2011 (NY, LA)
Studio: Samuel Goldwyn Films
Director: Giuseppe Capotondi
Screenwriter: Alessandro Fabbri, Ludovica Rampoldi
Starring: Filippo Timi, Kseniya Rappoport
Genre: Drama
MPAA Rating: Not Available
Plot Summary: Guido (Timi), a former cop, is a luckless veteran of the speed-dating scene in Turin. But, much to his surprise, he meets Slovenian immigrant Sonia (Rappoport), a chambermaid at a high-end hotel. The two hit it off, and a passionate romance develops. After they leave the city for a romantic getaway in the country, things suddenly take a dark turn. As Sonia's murky past resurfaces, her reality starts to crumble. Everything in her life begins to change—questions arise and answers only arrive through a continuous twist and turn of events keeping viewers on edge until the film's final moments. 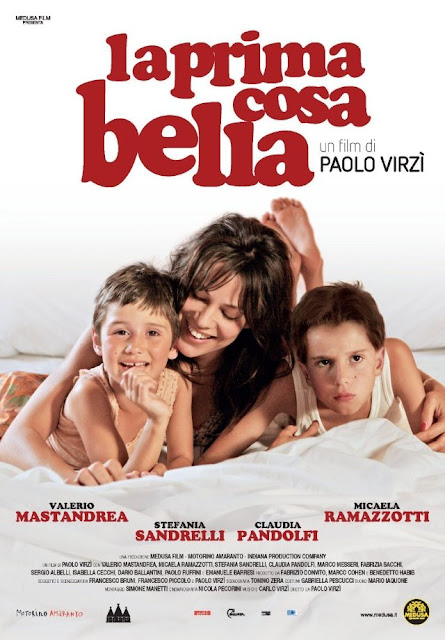 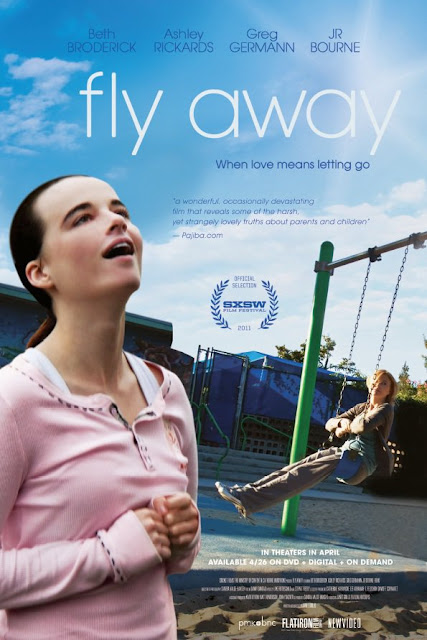 Fly Away
Release Date: April 15, 2011 (NY, LA, Washington DC)
Studio: Cricket Films
Director: Janet Grillo
Screenwriter: Janet Grillo
Starring: Beth Broderick, Greg Germann, Ashley Rickards, JR Bourne, Reno
Genre: Drama
MPAA Rating: Not Available
Plot Summary: Based on the award-winning short Flying Lessons, "Fly Away" tells the moving story of a single mother, Jeanne, grappling with the challenge of raising her autistic teenage daughter, Mandy. As Mandy becomes more and more unmanageable, so too does Jeanneʼs life. Over the period of two weeks, Jeanne is confronted with the most difficult decision a parent can make: to let go, allowing her child to grow, but also grow apart, or to hold on tight and fall together. 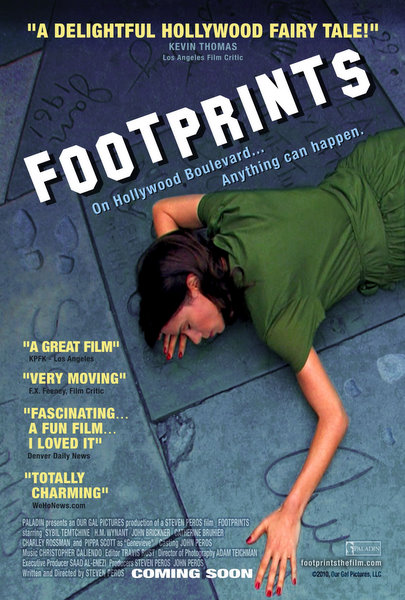 Footprints
Release Date: April 15, 2011 (NY, LA)
Studio: Paladin
Director: Steven Peros
Screenwriter: Steven Peros
Starring: Sybil Temtchine, H.M. Wynant, Pippa Scott
Genre: Drama, Mystery
MPAA Rating: Not Available
Plot Summary: "Footprints" is a haunting, hopeful and unforgettable mystery - the film chronicles a young woman’s journey of discovery on Hollywood Boulevard in one day, from sunrise to sunset. Sybil Temtchine ("Ten Benny," "Passion of Ayn Rand") stars as a young woman who wakes up at dawn on the handprints and footprints of the famed Chinese Theatre in Hollywood with no idea who she or how she got there. Upon awakening, she wonders if she isn't, in fact, lost in a dream. And perhaps she is. Regardless of whether she is dreaming or wide awake, Our Gal sets off on her journey, from one person to the next, one famous locale after the other. Among the Hollywood fringe denizens with whom she comes into contact are a pair of tour guides (Charley Rossman, John Brickner), two super hero impersonators (Catherine Bruhier, Riley Weston), a Scientology auditor (Joe Roseto), and a memorabilia shop owner (R.J. Cantu). She also finds herself disquietingly followed by a Stranger (Kirk Bovill) who may be real or a figment of her unsteady imagination. Although her feet only fleetingly leave Hollywood Boulevard, by sundown Our Gal will piece together the revelatory truth about her existence and the reason for her awakening, forcing her to make choices that will literally result in either her life... or death. 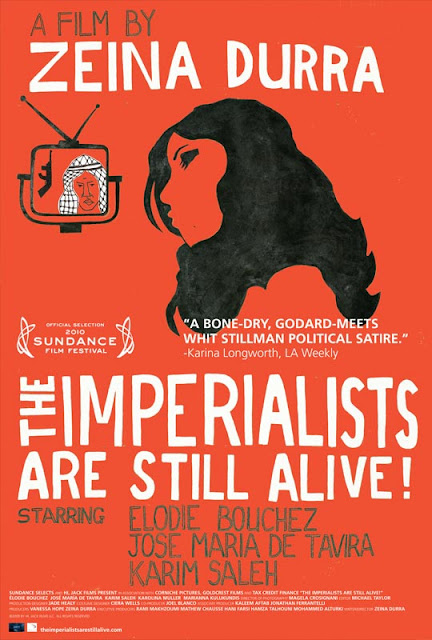 The Imperialists Are Still Alive!
Release Date: April 15, 2011 (NY)
Studio: IFC Films
Director: Zeina Durra
Screenwriter: Zeina Durra
Starring: Elodie Bouchez, Jose Maria de Tavira
Genre: Drama, Mystery
MPAA Rating: Not Available
Plot Summary: A successful visual artist working in post-9/11 Manhattan, Asya (Elodie Bouchez) lives the life of the hip and glamorous, replete with exclusive art parties, supermodels, and stretch limousines while she carefully follows the situation in the Middle East on television. Asya learns that her childhood friend, Faisal, has disappeared-the victim of a purported CIA abduction. That same night, she meets Javier (Jose Maria de Tavira), a sexy Mexican PhD student, and romance blossoms. Javier finds Asya's conspiracy theories overly paranoid-but nothing in Asya's world is as it seems. Asya's life is reflective of the themes of cultural fusion, and the complications and humor that arise simultaneously out of everyday life. Zeina Durra's atmospheric debut feature, which premiered at the 2010 Sundance Film Festival is an alluring and intelligent look at the way the war on terror seeps into the texture of everyday American life. Gorgeous 16 mm grain imbues the film with an anachronistic feel that interestingly evokes times past. 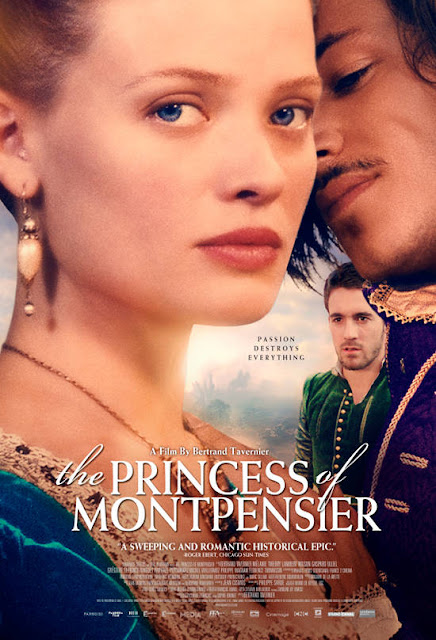 The Princess of Montpensier
Release Date: April 15, 2011 (NY)
Studio: Sundance Selects
Director: Bertrand Tavernier
Screenwriter: Jean Cosmos, François-Olivier Rousseau, Bertrand Tavernier
Starring: Mélanie Thierry, Lambert Wilson, Gaspard Ulliel, Grégoire Leprince-Ringuet, Raphaël Personnaz
Genre: Action, Adventure, Drama
MPAA Rating: Not Available
Plot Summary: In "The Princess of Montpensier," acclaimed filmmaker Bertrand Tavernier ("'Round Midnight") directs a spectacular cast in a riveting, lush romantic drama set in the high courts of 16th Century France. Against the backdrop of the savage Catholic/Protestant wars, Marie de Mezieres (Melanie Thierry), a beautiful young aristocrat finds herself married to a young prince (Gregoire Leprince-Ringuet), she does not love, haunted by a rakish suitor Gaspard Ulliel from her childhood, and advised by an aging nobleman Lambert Wilson, harboring his own forbidden desire for her. The Princess of Montpensier must struggle passionately to stay alive in the intrigue of this corrupt political and romantic web of duty, passion, religion and war. 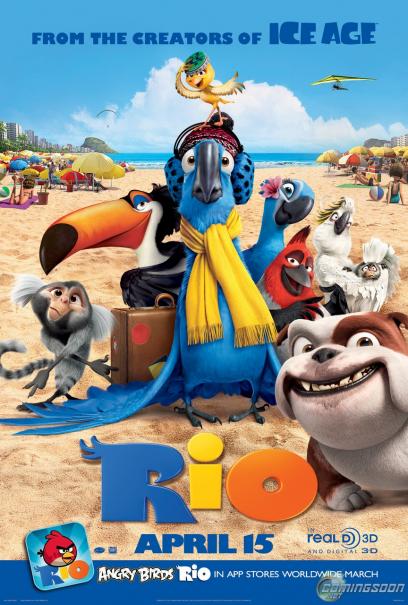 Rio
Release Date: April 15, 2011
Studio: 20th Century Fox
Director: Carlos Saldanha
Screenwriter: Don Rhymer
Starring: Anne Hathaway, Jesse Eisenberg, George Lopez, Tracy Morgan, Jemaine Clement, Leslie Mann, will.i.am, Jamie Foxx
Genre: Animation, Comedy
MPAA Rating: G
Plot Summary: "Rio" is a 3-D animation feature from the makers of the "Ice Age" films. Set in the magnificent city of Rio de Janeiro and the lush rainforest of Brazil, the comedy-adventure centers on Blu, a rare macaw who thinks he is the last of his kind. When Blu discovers there's another — and that she's a she — he leaves the comforts of his cage in small town Minnesota and heads to Rio. But it's far from love at first sight between the domesticated and flight-challenged Blu and the fiercely independent, high-flying female, Jewel. Unexpectedly thrown together, they embark on an adventure of a lifetime, where they learn about friendship, love, courage, and being open to life's many wonders. "Rio" brings together a menagerie of vivid characters, a heart-warming story, colorful backdrops, energizing Latin and contemporary music, and family-friendly song and dance. 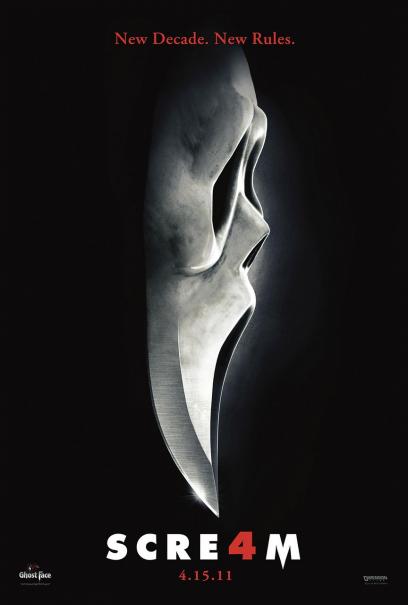 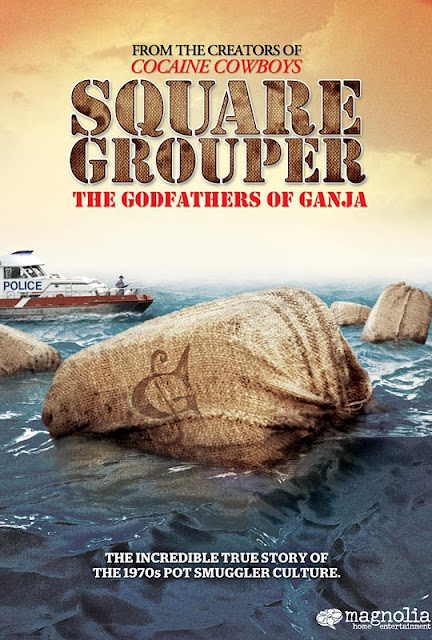