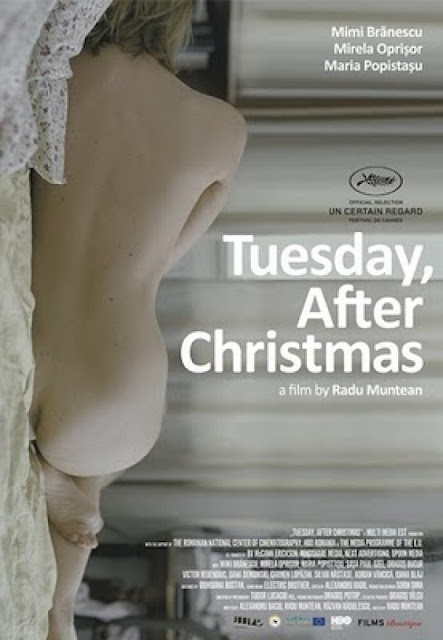 Tuesday, After Christmas
Release Date: May 25, 2011 (NY)
Studio: Lorber Films
Director: Radu Muntean
Screenwriter: Alexandru Baciu, Razvan Radulescu, Radu Muntean
Starring: Mimi Branescu, Mirela Oprisor, Maria Popistasu
Genre: Drama
MPAA Rating: Not Available
Plot Summary: An elegant, emotionally resonant drama of a middle-class couple whose 10-year marriage is rocked by the husband's illicit affair with their daughter's sexy dentist. In many respects it's an oft-told tale: Paul must choose between the easy rapport and stability of his family life and the uncertainty and excitement of a relationship with a much younger woman. In scorchingly intense long takes, the power dynamics among these three are unpredictable and, in the end, devastating. The fact that the two leads are actually a married couple adds to the verisimilitude. 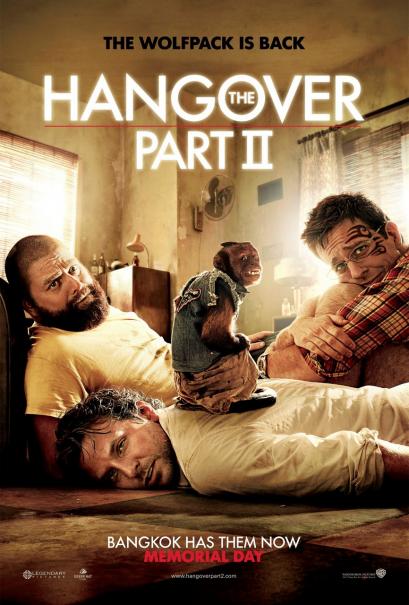 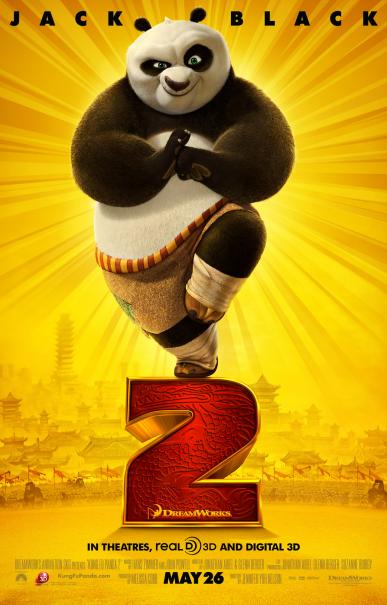 Kung Fu Panda 2
Release Date: May 26, 2011 (3D/2D theaters and IMAX 3D)
Studio: DreamWorks Animation
Director: Jennifer Yuh Nelson
Screenwriter: Jonathan Aibel, Glenn Berger
Starring: Jack Black, Angelina Jolie, Dustin Hoffman, Gary Oldman, Jackie Chan, Seth Rogen, Lucy Liu, David Cross, James Hong, Michelle Yeoh, Danny McBride
Genre: Animation, Adventure
MPAA Rating: PG (for sequences of martial arts action and mild violence)
Plot Summary: Po is now living his dream as The Dragon Warrior, protecting the Valley of Peace alongside his friends and fellow kung fu masters, The Furious Five - Tigress, Crane, Mantis, Viper and Monkey. But Po's new life of awesomeness is threatened by the emergence of a formidable villain, who plans to use a secret, unstoppable weapon to conquer China and destroy kung fu. It is up to Po and The Furious Five to journey across China to face this threat and vanquish it. But how can Po stop a weapon that can stop kung fu? He must look to his past and uncover the secrets of his mysterious origins; only then will he be able to unlock the strength he needs to succeed. 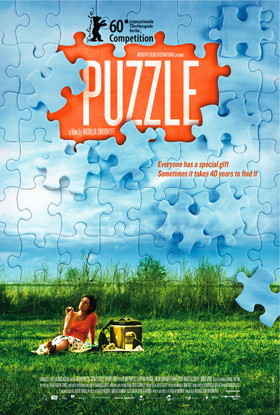 Puzzle
Release Date: May 27, 2011 (NY)
Studio: Sundance Selects
Director: Natalia Smirnoff
Screenwriter: Natalia Smirnoff
Starring: Maria Onetto, Arturo Goetz
Genre: Drama, Foreign
MPAA Rating: Not Available
Plot Summary: Maria del Carmen (Argentinian Academy Award nominee Maria Onetto) is a forty-something housewife from the suburbs of Buenos Aires, whom everyone, including her indifferent husband and teenage sons, takes for granted. When she discovers her extraordinary gift at assembling puzzles, Maria starts to secretly train with a magnetic millionaire bachelor (Goetz) for Argentina’s national championship, which, if she wins, would take her to Germany and the World Puzzle Championship. At the risk of alienating her family, Maria nevertheless pursues her new passion, as she gradually comes into her own and asserts her newfound independence. 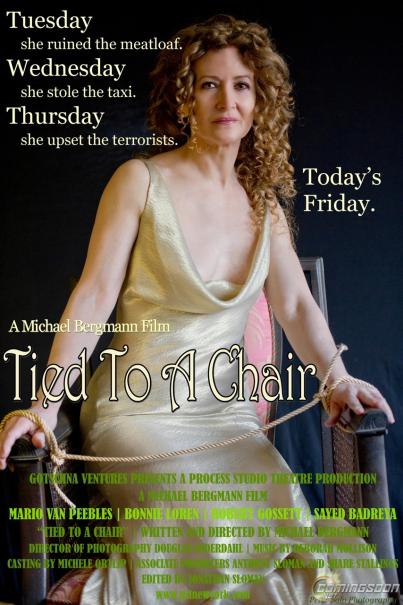 Tied to a Chair
Release Date: May 27, 2011 (limited)
Studio: Process Studio Theatre
Director: Michael Bergmann
Screenwriter: Michael Bergmann
Starring: Bonnie Loren, Mario Van Peebles, Robert Gossett, Richard Franklin, Sayed Badreya, Ali Marsh, Joselin Reyes
Genre: Comedy
MPAA Rating: Not Available
Plot Summary: The movie begins on the last day of Naomi Holbroke's marriage. After 9,125 consecutive burned dinners, each one of which results in a quarrel with her husband, she admits her failure as housewife to a high-ranking British government official and sets off to reclaim the acting career she gave up "for him" twenty-five years ago. In France at a small film festival, she meets Billy Rust, a man her age who directed a legendary cult film twenty-five years ago and has done nothing since. He's in Europe looking for actors for his next film and Naomi falls in love with... his script, particularly with the sequence in which the girl gets tied to a chair. Alas, the part calls for a "name or a much younger woman with a much more voluptuous figure" but Naomi perseveres and extracts a promise of a screen test in New York after getting Billy to tie her to a chair in his hotel room. Unfortunately Billy falls asleep right after making this promise, leaving Naomi to get herself out of his room, and down the stairs to the hotel lobby still tied to the chair.
Bruised but hopeful, Naomi arrives in New York for her screen test. On the way in from the airport the taxi driver takes all her money and then stops on the highway and tells her to get out. Worried about being late for her screen test, Naomi tricks him and steals the taxi. She arrives at the screen test with several police cars chasing the stolen taxi but has a larger problem when she gets to Billy Rust's loft: his body, or at least a body with the same taste in neckties, is lying beheaded on the floor surrounded by detectives and crime scene techs. Whatever trouble she is in now pales by comparison when Detective Peter Farrell barges in: the taxi driver is a suspected member of a cell that has been linked to a huge amount of dynamite stolen from construction sites around the city, and he wants the woman who was driving that taxi.
Farrell is not so easily convinced that Naomi just happened to be in the wrong place at the wrong time and Naomi has the feeling that for the first time in her life she may be in exactly the right place at the right time. And indeed, by the end of the film, after a number of increasingly dangerous mishaps and an equal number of increasingly brilliant stratagems, Naomi has foiled the plot and saved the city, though it is unclear how that will help her aspirations as an actress. Naomi Holbroke is an unlikely hero for a movie, but just as a lot of evil is done by people who are sure they are right, a lot of good can be done by someone who's used to being wrong. We need people like Naomi, though our dry cleaning bills will surely go up. 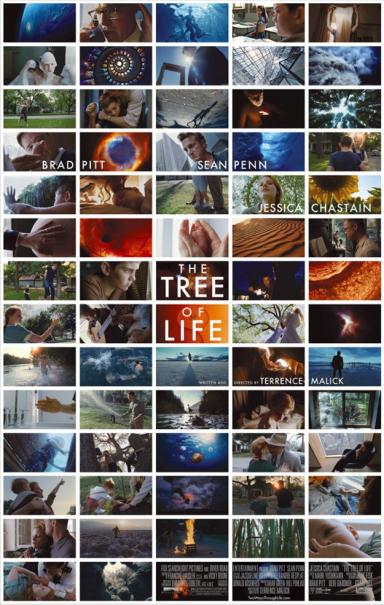 The Tree of Life
Release Date: May 27, 2011 (limited)
Studio: Fox Searchlight Pictures
Director: Terrence Malick
Screenwriter: Terrence Malick
Starring: Brad Pitt, Sean Penn, Jessica Chastain, Joanna Going, Jackson Hurst, Fiona Shaw, Crystal Mantecon, Tamara Jolaine, Hunter McCracken, Dustin Allen
Genre: Drama, Fantasy, Sci-Fi
MPAA Rating: PG-13 (for some thematic material)
Plot Summary: From Terrence Malick, the acclaimed director of such classic films as "Badlands," "Days of Heaven" and "The Thin Red Line," "The Tree of Life" is the impressionistic story of a Midwestern family in the 1950's. The film follows the life journey of the eldest son, Jack, through the innocence of childhood to his disillusioned adult years as he tries to reconcile a complicated relationship with his father (Brad Pitt). Jack (played as an adult by Sean Penn) finds himself a lost soul in the modern world, seeking answers to the origins and meaning of life while questioning the existence of faith. Through Malick's signature imagery, we see how both brute nature and spiritual grace shape not only our lives as individuals and families, but all life. 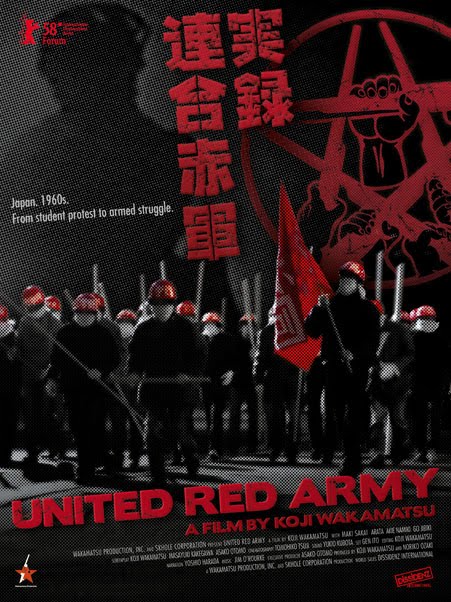 United Red Army
Release Date: May 27, 2011 (NY)
Studio: Lorber Films
Director: Kôji Wakamatsu
Screenwriter: Kôji Wakamatsu, Masayuki Kakegawa
Starring: Maki Sakai, Arata, Akie Namiki
Genre: Drama
MPAA Rating: Not Available
Plot Summary: Shot in a raw verite style, "United Red Army" explores the political unrest of 1960s Japan, when mass student uprisings coincided with the beginnings of the far-left United Red Army group, which tortured and murdered its "deviant" members during a 1972 training session.
Mr. Wakamatsu's harrowing film depicts the famed Asama-Sanso incident, which began when members of the United Red Army assassinated 14 of its own, during a group "self-criticism" session, and then broke into a holiday lodge below Mount Asama and took the wife of the lodge-keeper as a hostage. A standoff between police and the URA radicals took place, lasting ten days.
The radical student protests that rocked Japan in the late 1960s were in many ways, a response to the growing military alignment between Japan and the United States (ratified by the Japan-US Security Treaty signed in 1951). But the decisions made by the Japanese Communist Party, which was being accused of rigidity (and even "Stalinism") also played a role in the radicalization of the Japanese student movement during the 1960s and 70s in Japan.