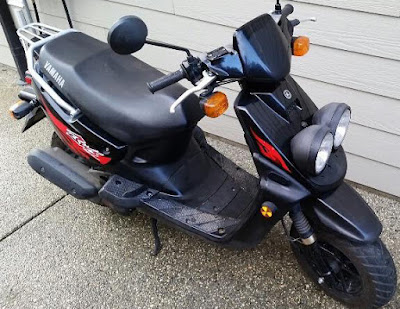 While surfing Craigslist, I came across a post for a 2005 Yamaha BWS YW50 scooter a.k.a. The Bug-Eye (They are called bug-eye because the headlights resemble the eyes of a bug). The seller was asking $600 as-is, since he was certain that he had blown the engine. Even with a blown engine, at $600 this was a rather good deal. I already own a highly tuned 2001 Yamaha BWS CW50 (Pre-Bug) and have always hoped to get my hands on a Bug-Eye. Why do I want a Bug-Eye so bad...

Well the 2005 and newer Yamaha BWS scooters have a much beefier front suspension, a slightly wider stance, and far better gearing for in city driving. So I contacted the seller to make an offer only to be told that the scooter was already SOLD. Oh, the highs and lows that come from scavenging through Craigslist.
The next day, I get a call from the scooter owner informing me that his previous deal didn't go through, and the scooter was still available if I still wanted it. So I borrowed my brother, and his pickup truck, and went to see this scooter. From its appearance the scooter was in quite good shape, but there was definitely some engine troubles. While I tried to gauge how severely damaged this engine was, without dismantling it for proper inspection, it would be all hypothetical. I tried haggling, but this seller stayed firm on his price, so I decided to take the gamble and buy the scooter anyways.
Unfortunately do to an issue with an corrupt memory card, I don't have any pictures of the scooter when I purchased it, which totally sucks. All the pictures in this post are not of my scooter but pictures of scooters that look almost identical. 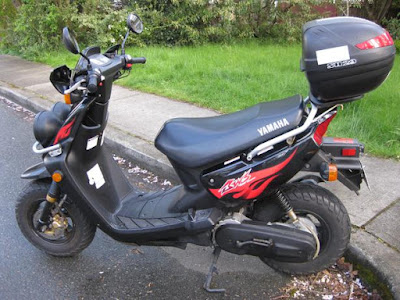 First thing I needed to do after getting the scooter home, was finding room for it in the garage. Now i had to determine how much damage had been done to the engine. Typically by removing a few parts I could have access to the engine, but since I already knew I would be fully modifying this scooter, I stripped it right down.
Check in on my next post when I document the tear-down process.