Truth be told, this repair was done quite some time ago and is actually part of my structured media home wiring project, which is still ongoing.
This Netgear Prosafe 16 Port Gigabit Switch was part of a Craigslist lot I purchased, containing a bunch of computer equipment.  Seeing as I had no need for this switch, at the time, it just sat in my office collecting dust. Once I started my structured media home wiring project I realized the 16 port Netgear could be quite useful, but after a few unsuccessful attempts at utilizing it I realized it was DOA.
Here's the situation, when this switch is plugged in, an LED will signify the unit is on and working, however whenever an Ethernet cable is inserted into any of the available jacks, there is no LED activity or connectivity. I took to the world wide web and came across a few similar situations all of which indicated that my unit probably had a bad capacitor. To verify if this was indeed the culprit behind my non functioning switch I would need to disassemble my Netgear switch.
By removing a few screws on the back allowed my to slide the cover off and expose the inner working of my switch, not a whole lot to look at besides a long aluminium heatsink. While inspecting the inner working, I came across a capacitor that looked to be bulging, you can see it in the picture below, its the one closest to the heatsink. 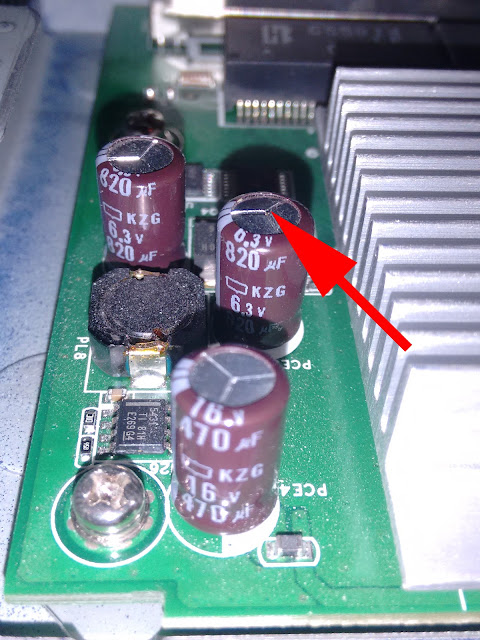 I wasn't really sure this was the problem, but I wrote down the part information (6.3v 820uf) and went to source the part. I located the capacitor on Ebay, 5 capacitors for $1.80 (CDN, Shipped), so I ordered them. Three weeks later and the capacitors finally arrived! 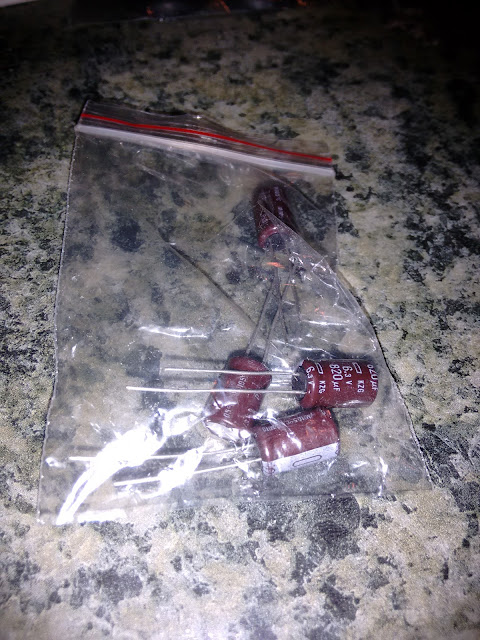 I desoldered the old bulging capacitor, and soldered in a new received capacitor. If your attempting this repair yourself, make sure you line up the capacitor so that negative lines up with negative (it's usually the side with a line on it).
I reassembled the Netgears cover, and proceeded to test the unit out. I plugged in the power and the LED turned on, I then plugged in my computers Ethernet cable and the port LED came on. Patched the Netgear switch into my existing network and tested by sending some files, and all is working as it should.
Great success! For $1.80 (CDN), I had fixed this Netgear GS116, and would be soon adding it to my structured media hopme wiring project, stay tuned for that!