Really Hastings? Time To Get Your S--T Together! 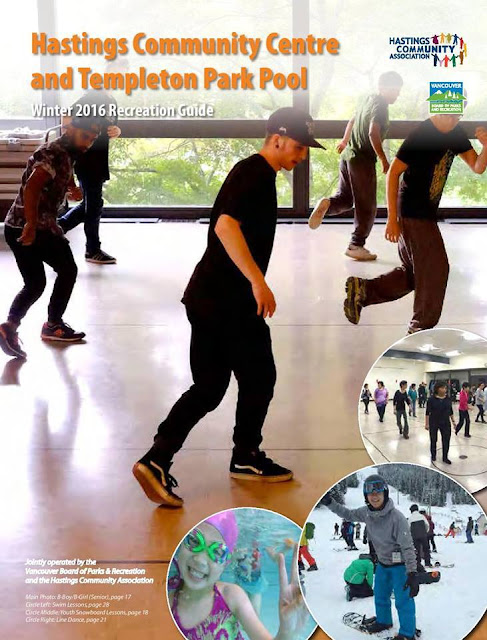 Allow me to best try and articulate my current emotional state as I have just received a copy of the winter program guide for Hastings Community Centre & Templeton Park Pool. 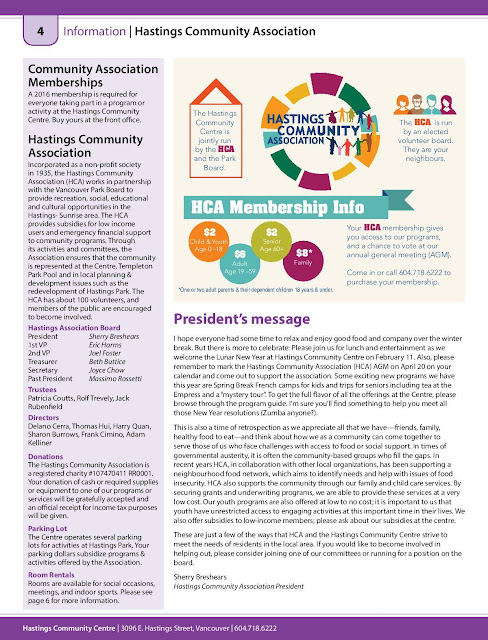 On page 4, of said brochure, you will see me listed as Past President. Of all my accomplishments over the 25 years of actively volunteering at community centres, this is by far the least impressive and most underwhelming achievement. Sure I revived both the defunct programs committee and fitness committee and helped bring new equipment to the fitness centre. I also restructure the fitness centre so it turns a profit, assisted in bringing about an out of school care program, and wrote an affidavit used in court to prevent this association from being evicted by the Parks Board from the community centre. I even ran in the 2014 Vancouver Civic Election hoping to get elected as a commissioner for the Vancouver Board of Parks and Recreation, so as to see the continued prosperity of community centre associations across the city.
Personally, while I may be biased, I don't think you could find a better candidate to serve on an association’s board or on the Parks Board other than myself. I have spent about 25 years actively volunteering my time to help local community centre associations. I started out at Thunderbird Community Centre by assisting Vancouver Parks Board's youth worker to help at risk youth. I contributed to the renovations of two community centres, and worked on numerous joint operating agreement committees seeking resolutions to community centre association and Parks Board differences.
After all that, Hastings and the 6 other associations I had been working with to fight Parks Boards theft of community assets, turned their backs on me, and refused to endorse me during the 2014 election. Their explanation was that I and Vancouver 1st, the party I ran with, did not respond to an emailed questionnaire sent out by the group of 6. To clear the air about this questionnaire... I did receive it, however it was sent to me informally, addressed to my private email, as would be any regular correspondence sent to me by this group. It was not addressed to me as a candidate via my Vancouver 1st email, but more as information as a colleague. Considering I was running in the election, I chose not to respond as it seemed to imply a conflict of interest. While I did not send out an emailed response to their questionnaire, I did attend numerous debates in which those very same questions were asked, and I gladly answered in person. Why Hastings and the other 5 associations wouldn't endorse me, is quite pathetic, but I'm sure they are happy with how things worked out.

While I feel betrayed by the 6 community centre associations, it’s Hastings that continues to display me as their Past President. While technically I guess I am still the Past President at Hastings, I haven't attended a meeting since before the 2014 Civic Election. It was sometime in October of 2014 where the Hastings Board of Directors had asked me to resign from the position as Past President, a request that bordered on violating my charter rights. I refused, purely on principle. Subsequently I have not received any official correspondence from this board of directors since, with the exception of minutes and agenda for an October 2015 meeting, which I assume was sent out in error.

While I may have stepping away from actively volunteering, I look back on a wonderful journey having had an opportunity to work with so many great community minded volunteers across this city. Thanks to all of you, and a special thanks to all the dedicated and caring Parks Board staff forced to endure during this difficult and demanding time of uncertainty between community associations and the Parks Board.
Hastings, however, it's time to get your s--t together! Those on this board who are actually knowledgeable, rarely attend, and those that attend are rarely knowledgeable. Either start treating me like any other board member by sending me proper and official correspondence, or make a motion and have me removed!